If I’m being honest I usually dread innovation day, not because I don’t find it fun but usually because the topic is some boring thing. Although this year wasn’t really an exception I still enjoyed making the actual simple machine.  With a partner, we researched and fabricated a class two lever. I was fairly happy with the outcome however according to the rubric the creativity of our simple machine model is definitely one area where we need to grow.  However, I do disagree with the marking. I don’t necessarily know what I would change for the rest of the categories we scored pretty highly on. I think working on the visual aspects of our presentation (both in and out of class) helped us do better.

When have you had to demonstrate bravery and courage? What is the hardest thing about having courage?

“We believe in ordinary acts of bravery, in the courage that drives one person to stand up for another.” Veronica Roth, Divergent.

When I saw the prompt for this week’s paragraph of the week, my mind went straight to here. Sometimes, so many small things take a tremendous amount of courage. An example of this might be simply saying hi to someone you may hardly know. In my opinion, these small acts of bravery can make you feel spontaneous instead of cautious. It is the ordinary acts of courage like talking to a stranger that leads to going against someone. I find it hard to remember one particular act of bravery, but sometimes it feels like these more minor accomplishments feel just as great.

Home can have many meanings. Some people call it just a building, and other people call it where the family is. Although I have places like these where I will always feel like I have a family, there are also many places that I can never truly experience. There is a word for this feeling; a Hiraeth. The word Hiraeth is a Welch concept and does not exist in the English Language. Hiraeth is a multi-layered word, and no single word in English can describe this. It can mean homesickness, nostalgia, yearning or longing for a world that you can never return to, no longer exist, or in my case, never existed.

I am an avid reader and have experienced many books that will always feel like home, but sadly will never be. Some of the most common places that feel like this to me are Hogwarts from Harry Potter and Camp Half from The Percy Jackson series. Although neither of these places exists  -that I know of- they will always feel like a home to me because of the characters as well as the setting. They all have clear skies and amazing woods. That I would never get tired of. But they don’t exist and I have to live with that and take advantage of the places that I can go to and will always be home.

A place that will always be my home is my summer camp. My camp is on the smaller side and my bunk will always be like my family. It’s far enough away from the cities that there is never smoke in the sky, and will always be the best place for stargazing at night. From the lake to the green forest it will always hold a special place in my heart.

On October sixth (2021)  Mellissa Eddy, Berlin-based correspondent for the New York Times published an article titled “Vandals Tag 9 Barracks at Auschwitz With Antisemitic Slurs”. In this article Eddy expresses a few of the hate crimes that have happened in Europe. Although I would like to focus on one.

In the last week, more hate crimes of antisemitic attacks have been added to the list including the antisemitic graffiti on nine wooden barracks in the Auschwitz concentration camp, near the gate of death. The police in Oswiecim, Poland stated the attack happened sometime between 8 am to noon that read antisemitic slurs and swastikas in the barracks that housed men. The slogans that were sprayed with black paint, read multiple phrases denying the holocaust ever exited in both German and English. The officials at the Auschwitz-Birkenau camp have made the decision to not publicize the photos of the vandalization or specify the words used in hopes of spreading more antisemitic hate.  Some officials there called it “an outrageous attack on the symbol of one of the greatest tragedies in human history,”(Eddy, Mellissa, Vandals Tag 9 Barracks at Auschwitz With Antisemitic Slurs, https://www.nytimes.com/2021/10/06/world/europe/auschwitz-antisemitism-graffiti.html , 6, Oct, 2021).

At Auschwitz, around 1.1million people perished and the majority of them were Jewish.  They perished from the gas chambers as well as cold, hunger and other diseases. Where the recent graffiti was sprayed was an area of the camo where men were in wooden bunk beds stacked three from floor to ceiling.  When the official page of Auschwitz wrote on their Twitter to explain how they feel this is an extremely painful blow to the memory of all the victims’ ‘ who perished at the camp” (Eddy, Mellissa, Vandals Tag 9 Barracks at Auschwitz With Antisemitic Slurs, https://www.nytimes.com/2021/10/06/world/europe/auschwitz-antisemitism-graffiti.html , 6, Oct, 2021).

Although this act of antisemitism is one of the more painful acts due to Aushwizt’s camp’s role in the holecaust it is also just another statistic. Countries all across Europe have had rising amounts of hate crimes especially towards jews. Many observers have shown their concern to many jews feeling unsafe. In response the EU has earmarked just under $28 million to increase the protection of synagogues and other Jewish sites. Although this is a change we shouldn’t let hate crimes like these go unnoticed.

Welcome to an online trip threw Israel. There are a lot of games and links threw out the slide show, click. on most pictures and it will take you to an activity. When you first get started there will be a map, click any place on the map and you will travel there. To return to the home screen click the small icon of a house. I hope you enjoy!

(P.S If you have any feedback please let me know.)

In Math we learned about converting different currencies along with exchange rate. At the end of the unit our teacher helped us with creating a currency converting app with code.org.

I found it really challenging when I missed spelled a word because that would make the rest of my code not work. It was also hard to create the design, despite the design being really simple I wanted to try to make it the most practical it could be.

I like coding however I found it a lot easier having a guide then tryin to take the blocks and figure out what exactly to do next.  The way we did t in class with guidance was a lot easier than just trying to figure it out and then not realizing where we went wrong.

I think that it was important to learn this to have a better understanding of what  we are learning in class but also to have something new that in the future could potentially help us. 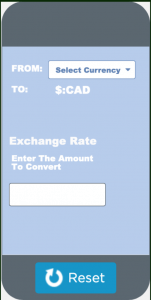 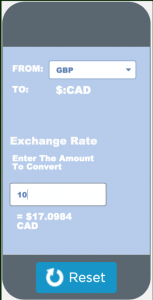 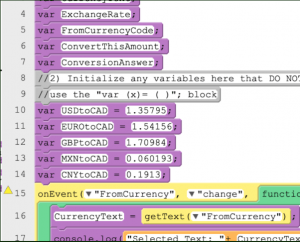